COLUMBUS, Ohio – Arike Ogunbowale’s game-winning heroics in the 2018 NCAA Women’s Final Four here this past weekend have made her a Notre Dame and college basketball legend.

Before a national audience watching on ESPN2, the junior guard dispatched UConn on Friday with a last-second basket in the national semifinals for a 91-89 overtime victory. Sunday in the national championship game against Mississippi State, she capped Notre Dame’s rally from a 15-point second-half deficit with a 3-pointer at the buzzer for a 61-58 victory and title.

Pat Lowry, ESPN coordinating producer, and her team captured the ESPN commentating trio’s reactions with the use of the announcer cam, which was used in 2017 Final Four coverage as well, embedded at the broadcast table. The video of the trio’s call of the Notre Dame semifinal game-winner went viral on Twitter (see immediately below) and so the “snoop camera” was deployed and shown at the end of the national championship game telecast as well (see above).

“With an overtime in both national semifinals on Friday, I don’t think any of us thought we would be lucky enough to get a third game – the National Championship game – with a superhero ending,” Lowry told Front Row. “I love recording the ‘snoop camera’ with announcer reactions . . . It tells you so much about each of them.

“Adam popping up to make the perfect call was just terrific and so Adam … excited, bouncy, fun. Clearly, Kara has a poker face; I will not be playing poker with her ever! Her reaction is indicative of who she is – an extremely disciplined person. I loved Rebecca’s reaction! The ‘I can’t believe she did it again’ excitement while having the discipline to not scream like almost everyone watching must have done is very impressive!”

Lowry said the commentators’ different reactions “gives you some insight into why they make a great team and what each of them brings to the team.” 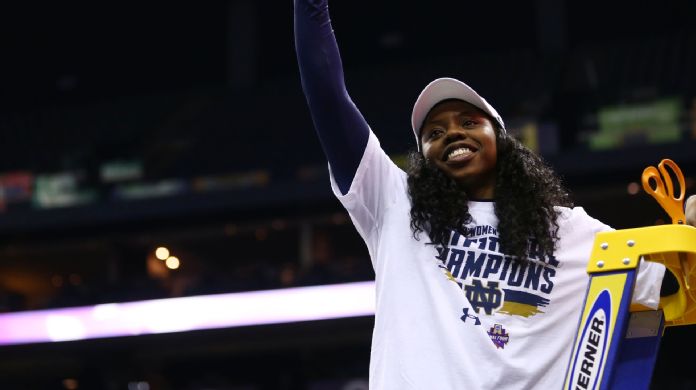