On the April 18 edition of ESPN’s Wednesday Night Baseball, the Cleveland Indians played the Minnesota Twins at Hiram Bithorn Stadium in San Juan, Puerto Rico. The 16-inning game, which continues ESPN and MLB’s collaborative effort to air games in unique and innovative locations, was played hours after an island-wide blackout hit Puerto Rico. Officials determined the game could go on as scheduled with the help of backup systems.

“I’m so happy that we were able to bring smiles and joy to the many people who had the opportunity to see Puerto Rico hosting a Major League Baseball game seven months after one of the most devastating natural disasters in recent history,” said Rivera, who made her fifth visit to the island since the hurricane. “It’s an extraordinary accomplishment that Puerto Rico should feel very proud of.

Esta gente en las gradas me parece conocida… this #PuertoRicoSeries is even more special because of my “familia”… pic.twitter.com/W974WzHg7x

“I feel very proud of ESPN for the telecast that we put together under very difficult circumstances, and I’m particularly in awe of the production and operations crew who made this game possible when faced with a very daunting task in the middle of an island-wide power outage. This was much more than a baseball game for me, for my family, and for the millions of Puerto Ricans who firmly believe that the island will bounce back, wiser, stronger, and better than ever.”

As we bring the #PuertoRicoSeries to @ESPN and @ESPNDeportes tonight, we invite you to watch the compelling story of @Indians catcher @robperez2015 and his mom Lilliam, who lost her home in the aftermath of Hurricane Maria https://t.co/FZrkYSvOeR

In advance of the game, Rivera reported on Cleveland Indians catcher Pérez and his mom Lilliam (see tweet above), who lost her home in the aftermath of Hurricane Maria. Visit ESPNDeportes.com to watch the feature in Spanish.

Earlier this year, Rivera also interviewed several Puerto Rican MLB players and coaches who came home to aid the island, as seen in the video below.

Marly Rivera provided the photos in the gallery above. 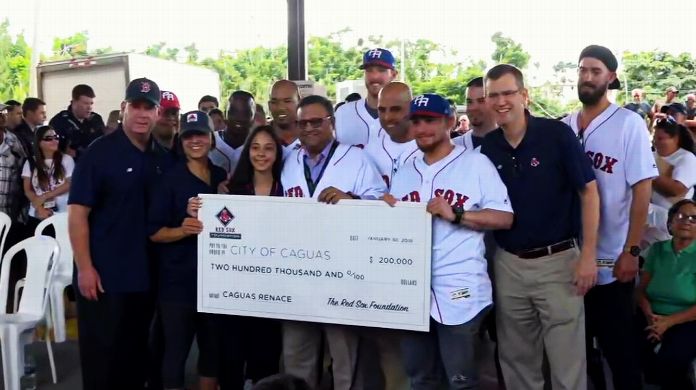