Holly Rowe will be calling play-by-play for ESPN’s WNBA season opener on Sunday, May 20 (5 p.m., ESPN2), her first time commentating for a professional sports game. She’ll call the Minnesota Lynx versus Los Angeles Sparks game, a rematch of the 2017 Finals.

Rowe is a big fan of the WNBA and has contributed to covering the league since its inception. She has worked her way up the ranks from production runner and stage manager, to analyst, reporter, and now commentator. In this video from June 18, 2002 from Rowe’s personal records, she serves as the analyst for Salt Lake City station KJZZ’s coverage of the Utah Starzz versus Indiana Fever game.

The video above is courtesy of KJZZ, NBA Entertainment and Holly Rowe. 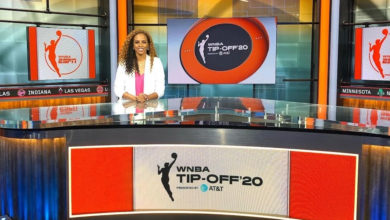