On Sunday, Dec. 11, a new episode of E60 goes deeply behind the scenes with the Ukrainian Men’s National soccer team as it tried to qualify for the FIFA World Cup while its country was at war.

Producer/director Russell Dinallo worked with a team, including reporter Wright Thompson, that followed the Ukrainians for six months to nine different countries. He believes this is one of the first documentaries of any kind done on a Ukrainian subject since the Russia-Ukraine war began this February.

His involvement in the project came after a phone call from E60 Executive Producer Andy Tennant.

“Obviously, I had some knowledge of what was going on with the invasion and the war, but it was one of those moments that takes you back,” he said. “I asked him to give me a day or two to think about it, but he said, ‘We need you to leave on Sunday.’ Four days later.”

Dinallo talked it over with his wife, Kristen Lappas Dinallo, who also is a producer/director. “We both thought this is going to be challenging, but it’s also such a special and important story that I should go for it,” Dinallo said. “So four days later, I was on a plane to Italy.”

Though Thompson had gotten encouragement from the Ukrainian embassy that E60 would have access to the team in Italy, when the crew arrived in Florence, that was not the case.

“We met the team’s media director, and they were basically like, ‘who the hell are you guys?'” Dinallo said.

“They’re in this moment there’s so much pressure on them, they’re a couple of weeks away from trying to get into the World Cup, they don’t know us from anyone, there’s media outlets there from around the world, so we tried to be respectful of that, but also start to build a relationship.”

From Italy, Dinallo went to Croatia and Slovenia, where the team had its home base for training, and to Scotland, Wales, Armenia, and Poland. Thompson later went to Kyiv, Ukraine.

Dinallo said he had never worked with Thompson, an award-winning senior writer for ESPN.

“I’m a big fan of his writing,” Dinallo said. “The piece he did on Michael Jordan turning 50, the piece he did on Johnny Manziel, those were stories that influenced me as I was trying to get into the storytelling world.”

Dinallo said he learned a great deal during the project.

“The hope is to have viewers connect with these characters who are from the other side of the world, understand what they’re going through, and understand they’re a lot like us.” 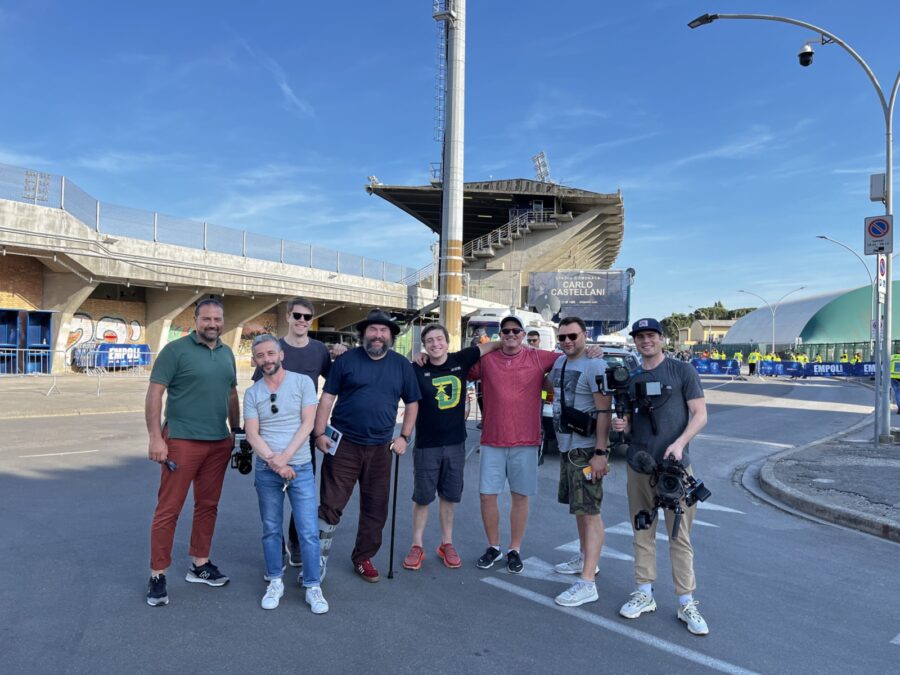 The E60 crew stands outside of the soccer stadium in Empoli, Italy, where the Ukraine national team played a friendly match during training. (Russ Dinallo/ESPN)