Facebook Twitter
The Rose Parade in Pasadena, Calif., is a tradition that dates back to 1890. The annual New Year’s celebration organized by the Pasadena Tournament of Roses features floral-decorated floats, equine units, and marching bands and has been televised since 1946.

A longtime television home of the event, ABC will again provide a national broadcast of the 134th Rose Parade on Monday, Jan. 2, at 11 a.m. ET. While SportsCenter anchors Hannah Storm and Sage Steele will co-host the coverage, joined by five-time Olympic medalist John Naber, most fans might not realize that ESPN actually produces ABC’s parade telecast.

Vice President and Executive Producer Jamie Reynolds, who leads ESPN’s grand slam tennis coverage, oversees the Rose Parade production for the third straight year. He discusses the challenge of shifting gears from a live sports mindset to a parade and what makes for a successful telecast.

A parade differs from a live game or match. How do you approach this assignment?
We spend so much time and energy deconstructing the competitive storylines, and player performances when we are covering games, but doing something like this is celebratory; it’s very calibrated, synchronized performances. You have this whole run of show, and now we’re just observers; we celebrate the pageantry of it all. It’s just an interesting dynamic where we have to shift from being a sports production unit to a more “entertainment-driven” production.

ABC is one of several Rose Parade broadcasters. How does the arrangement work?
The Tournament of Roses has a Broadcast unit that provides a world feed that is shared with ESPN/ABC and a host of other broadcasters. Each network takes a split and adds its own enhancements; our unique coverage only appears on ABC. Each broadcaster is located at a different position along Colorado and Orange Avenues in Pasadena, so for the most part, we are all seeing different performances along the route at any given moment.

How many ESPN staff are involved in the production?
Ty Frison from our LAPC office directs alongside Jack Graham – an ABC Sports producer who has handled the parade for more than 20 years. Traditionally it has been a core group of the Operations team that has been on site to keep this event on track. Still, each year we have tried to introduce a few more Bristol-based employees to support the production – it’s been a special and unique event that many have asked to be a part of.

Is there any crossover with ESPN’s Rose Bowl Game telecast?
This is really the opening act for the game and what the whole day represents in Pasadena. Because we’re on in the morning, we’re really a promotional engine to celebrate the day. Within the game, [coordinating producer] Bill Bonnell and their team will feature some of the moments and the floats that will win various awards that day.

Can't wait for the first-ever meeting between @Utah_Football and @PennStateFball! See you in Pasadena on January 2! 🌹🌹🏈🏈 pic.twitter.com/CYNae6FLTC

What makes Storm and Steele so uniquely qualified to host the parade?
It’s a fun event to be a part of. It’s got stature and notoriety. You’re going out to a big audience on ABC. Hannah and Sage bring this fun, appreciative style to the celebration. This event has been around since the 1890s and was first telecast live following World War II in 1946. They are enthusiastic about it, and it’s genuine. They bring the essence of this cultural event, bringing sparkle, entertainment, and an appreciation that adds to the depth of the experience.

Have any innovations or enhancements been added to this year’s telecast?
We are debuting a new highly-stylized graphics package with EPIC Games to elevate the stature and performance of the show. This will be the wrapping paper of the whole two-hour presentation. It will bring an elegance and a sophistication. Doing this shows that we understand what The Tournament of Roses is trying to convey to the world, and so we give it a bit of a stylization that’s in phase with their event, so it’s staying in harmony with that.

The beauty of this is it’s a highly-scripted show where you don’t have to adapt on the fly. Debuting this kind of package in a regimented, structured show, you can follow the playlist and give this a test drive, and then figure out how quickly and manageable it is in a real-time situation before you use it with Xs and Os in a football, basketball or baseball game.

What determines a successful parade telecast?
It’s a major timing exercise because you have this highly sophisticated, large group of elements that have to be choreographed throughout the on-air window – from horses to marching bands to floats – that have to stay on track and make it all the way through the parade route and finish their performances on time.

Success for our team is capturing the essence, soul, and tradition of what makes this event work. It’s about full appreciation for recognizing this is really a labor of love for the volunteers and performers who share in being a part of this tradition – from the float designers, the volunteers who painstakingly build the presentation, to the bands and equestrian groups that have put thousands of hours into the artistry of their crafts – it’s special. Our goal is to capture the essence of that spirit and pride so that everyone enjoys the pageantry and makes it all come together properly.

It’s one thing to see the balloons get blown up in New York the night before the Thanksgiving Day parade; watching them stage along the side streets in town and begin to line up along the main avenue in the early morning truly transforms Pasadena into a magical experience. Add the marching bands and equestrian groups laced between alternating positions between these 75-foot-long floats reaching heights of 30 feet or more – it truly brings this place to life. It’s an incredible experience. According to the Rose Parade's official site, " each float entry presents a unique theme and visual story that bring their float to life." (Rose Parade/ESPN) 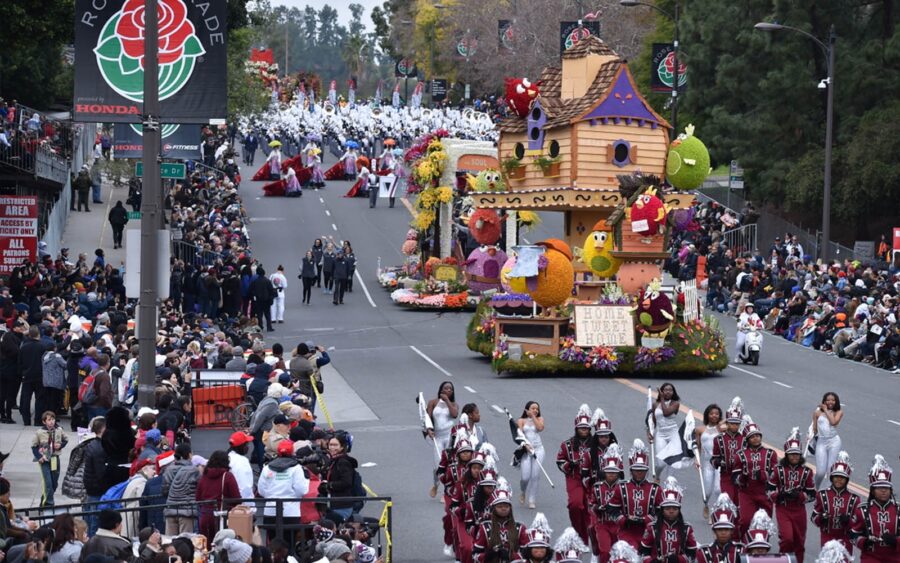 " . . .it's a whole different experience to witness these some 50 floats brought to life over the holiday week in Pasadena," ESPN's Jamie Reynolds says. (Rose Parade/ESPN)