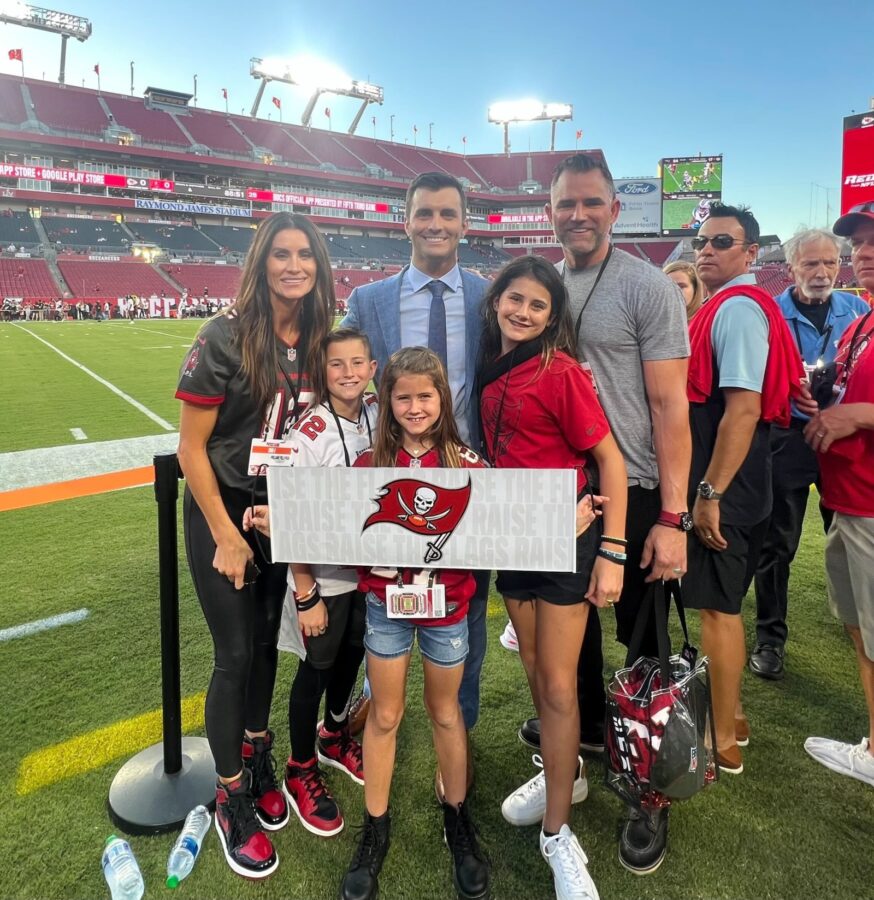 The Reeb family and Darlington pose on the sideline before the Bucs-Chiefs game on Oct. 2. (Jeff Darlington/ESPN) The beginning of an everlasting bond all started when Jeff Darlington, ESPN NFL reporter, was on assignment for the host Tampa Bay Buccaneers’ matchup against the Chicago Bears during Week 7 of the 2021 NFL season.

“I was on the sideline waiting to do my post-game interview, and I saw this kid holding a sign,” said Darlington. “I was immediately struck by the sign.”

“I see Tom Brady start to walk over, and I thought, ‘Whoa, this is a moment.’ I took a picture of it as Noah put his face in his hands and just started crying,” said Darlington. “You could just see the emotion of the moment.”

“I texted Greg Jewell, ESPN Features Unit Coordinating Producer, literally from the sideline, and said we have got to find out the story behind this kid.”

As Darlington was walking out of Raymond James Stadium, he spotted a father and son playing catch in the parking lot – Noah and his dad, James – a “serendipitous meeting,” according to Darlington.

“We talked for 45 minutes and played catch while they waited for their Uber,” said Darlington. “Basically, at the end of the conversation, I told them I wanted to come to visit them in Utah.”

In the year since Darlington told his story, Noah has attended Super Bowl LVI – courtesy of Brady – the Dick Vitale Gala in Sarasota, Fla., where he met Chairman, ESPN and Sports Content, Jimmy Pitaro, Disney World through the Childhood Cancer Society, and of course, another Bucs game.

Darlington and the Reeb family have stayed in close touch throughout – reuniting on the sideline of the Bucs-Chiefs game earlier this season when the family was surprised with pregame field passes.

In the midst of all of his travels, he is still going to the doctor every three months for routine PET (positron emission tomography) scans. Thankfully, Noah is cancer-free.

“I don’t know what happens if I don’t see them in the parking lot,” said Darlington. “There is a chance I find them but you don’t know if you talk to someone over the phone if you are going to have the immediate connection and understanding of the magnitude of their story.”

Said Darlington, “I see a scenario where another outlet does the story first and doesn’t turn out as powerful and doesn’t resonate the same way. So I think it was just this big serendipitous confluence of circumstances that kind of benefited everyone involved.”

In May 2022, “Hey Noah” – produced by Josh Vorensky – was nominated for Outstanding Long Feature at the Sports Emmys. Watch the original feature in the SportsCenter Facebook file below.

“Telling stories like this one is my favorite part about sports journalism,” added Darlington. “Maybe even sports in general.”

For more on ESPN, The V Foundation and V Week, visit ESPN PressRoom