The TCU versus Georgia showdown will be covered from every conceivable angle, with the concourse outside SoFi Stadium scenics arriving courtesy of none other than “Rafiki.”

That’s “The Lion King”-derived nickname of the DJI Mavic 3 Cine drone flying up to 200 feet above the ground outside the Inglewood, Calif., venue to help deliver the Championship Monday atmosphere. The 11-year ESPN/Disney employee – and former ESPN intern from New Mexico State University – tells Front Row how a drone will be used as part of tonight’s coverage, how ESPN developed and refined use of its 22 camera-equipped drones in other storytelling opportunities across Disney platforms, and why the drones boast nicknames reflective of Disney characters. 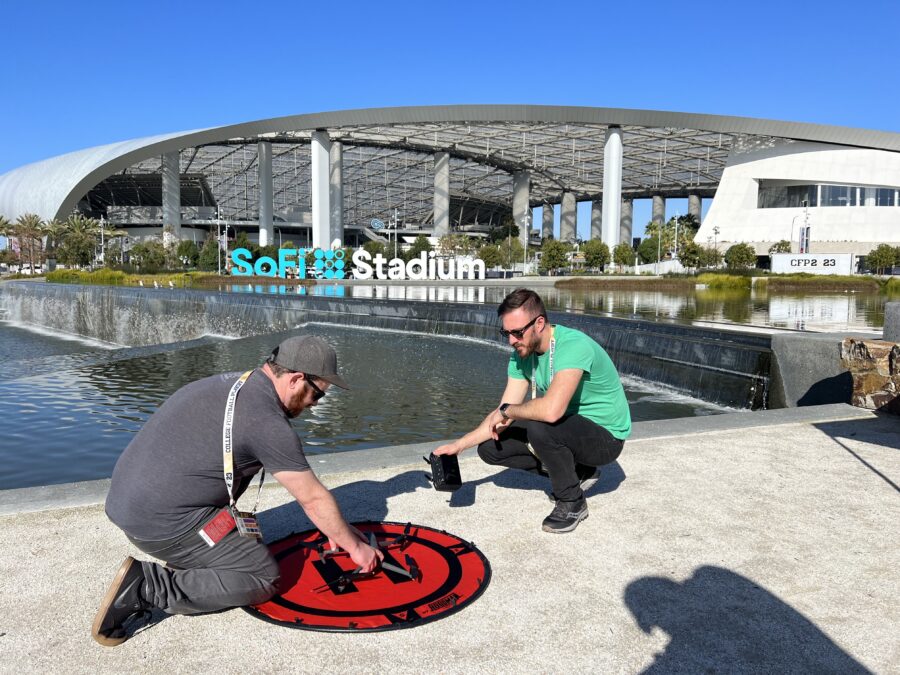 Humble had been working in ESPN’s Production Operations department doing numerous jobs in the studio and control rooms.

In 2016, his wife Kaitlin purchased a drone for his birthday. Humble became a skilled, officially FAA commercially-licensed drone pilot.  Word spread, and his ESPN colleagues wondered how his skills might apply to their properties.

“I spent the better part of a year and a half working with Disney Risk Management and ESPN Business Operations and ESPN Legal a bunch of other groups to try to get permission to fly a drone for the company,” Humble recalled.

“Eventually, everything came together,” including Disney’s purchase of company drones to use for business purposes.

“It just blew up from there once different productions realized they could get drone footage,” said Humble, whose six-month old Drone Operations group now includes fellow pilots Mike Shea and Tom Williams. They were in Pasadena, Calif., last week as part of ABC’s 2023 Rose Parade and Rose Bowl coverage, produced by ESPN.

Shea will pilot “Rafiki” tonight as part of the CFP Championship coverage; Williams will serve as Shea’s Visual Observer and backup pilot.

How did these drones earn Disney-inspired nicknames?

“Normally if you have more than one drone, you’d name them with letters of the alphabet. So you’d have an Alpha, Bravo, Charlie. And so when we first started, when we got our second drone, we had the A drone, the Alpha drone, and so we’re like we got to do something different,” Humble said. “So we said, ‘Let’s go with two Disney characters. ‘And so we decided to start doing that and we’re about almost to the end of the alphabet.”

It's fun to see how we got here.

The deployment of drones has been part of the planning for CFP Championship coverage since 2020. And the Drones Operations group’s work has enhanced many other Disney platforms (see the accompanying video).

Game One of ESPN’s Friday night NBA doubleheader between the Golden State Warriors and San Antonio Spurs (7:30 ET, ESPN), which is expected to have 60,000 fans in attendance at the historic Alamodome, will make use of the innovative drone capabilities.

Humble credits, among others, Chris Calcinari, Senior Vice President, Production Operations, Disney, for the evolution of use of drones in ESPN’s telecasts.

“Our group’s creation and success are thanks in large part to Chris Calcinari,” Humble said. “His trust in us and his vision for innovation have helped us become the group that we are today.”