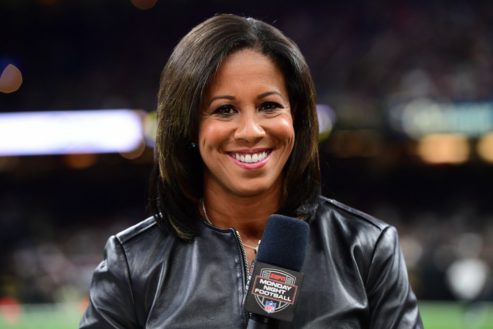 Lisa Salters, a native of King of Prussia, Pa., will be close to home tonight as she reports on the Packers-Eagles for MNF. (Phil Ellsworth/ESPN Images) For five seasons and more than 75 games, Lisa Salters has reported from the Monday Night Football sideline, one of the most visible roles in televised sports.

A native of King of Prussia, Pa., a suburban community on the outskirts of Philadelphia, Salters will work her fourth MNF “home” game tonight at Lincoln Financial Field. Ahead of the Packers-Eagles (ESPN, 8:15 p.m. ET), Salters discussed her hometown and other topics with Front Row.

Tonight is your fourth MNF game in Philadelphia. Is your MNF routine here any different since you grew up nearby in King of Prussia?
When you’re on the road, you have a routine. You get up at a certain time, you read your notes, you prepare – everything is set. When you’re at home you’re like I’ve got to see my mom, I have to make sure I see my 85-year old aunt, I have to go to the mall, make sure I go to South Street and get a cheesesteak.

So you’re trying to do all these extra things, and you find yourself spread a little thin. I always say home games are the hardest. So whether I’m at home in Baltimore or “at home” in Philadelphia where I grew up, those are the toughest games because you’ve got all your family around you and you have work to do.

What are your thoughts on working with play-by-play commentator Sean McDonough in his first season on MNF?
I love Sean [McDonough]. He’s very funny. He has a dry sense of humor and he’s just a great storyteller. After he joined us, I was just impressed learning a bit more about him – how he has broadcast the World Series. I was like, ‘This [MNF] should be nothing for you. You’ve already done so many great things in your career.’

I had the chance to talk to @saltersl of @ESPNNFL about coming back to Philly, Thanksgiving, Gruden & cheesesteaks. https://t.co/7Tr2Uzm3Zi pic.twitter.com/bYN8w3qaoH

The MNF group is really a lot of fun. From the moment we get together, we are sharing pictures of our families or teasing each other about something. We’re together from Friday to Tuesday. I wish that everyone could see what our meetings are like. We’re laughing, enjoying being in each other’s company – all for the singular goal of creating an outstanding TV broadcast. There’s no drudgery at all. As a team, we work very hard but have a great time from August to January every year.

Describe your MNF work day and how you pace yourself through the day.
I get up early and make sure I’m ready for the Monday Night Football production meeting at 10 a.m. After the meeting and makeup, I get picked to arrive at the stadium at 1:30 p.m. At 2:30 p.m., I’m on the air for the first time. I do TV reports all day long – updates, injury reports, breaking news, and more, leading up to the game.

Usually, I am tired by kickoff at 8:25 p.m. So, what I do is I change clothes. I bring an outfit for pregame and an outfit for the game. I change my outfit so that I feel like I’m about to start something new. That’s just my way to get myself going again. Closer to kickoff, I change clothes and then work until midnight.