The 2019 NBA Playoffs have kicked into high gear in the Conference Semifinals round.

The drama was never more evident than on Friday with a historic four-overtime thriller in which the host Portland Trail Blazers outlasted the Denver Nuggets to take a 2-1 Western Conference Semifinals series lead. The Blazers’ 140-137 victory in the Moda Center marked the first time since 1953 that an NBA Playoffs game went into four overtimes.

ESPN’s coverage of the telecast generated a 3.0 metered market rating and incredibly maintained a 3.1 rating from 1:30-2:15 a.m. ET.

ESPN’s game coverage team on multiple platforms features many storytellers who excel moments like these, no matter the hour, including play-by-play commentator Dave Pasch, analyst Doris Burke, and reporter Tom Rinaldi in Portland. This morning, Front Row caught up with Pasch with the hope that his breakfast does not resemble his friend and colleague Bill Walton’s meal (see Pasch’s tweet below).

Where did Friday’s game rank among your most memorable?
It’s certainly near the top of the list of more memorable games I’ve called. I’ve done college football overtime games and an NFL playoff overtime game, but there’s something different about an NBA Playoffs game when you’re courtside and can see everyone’s faces and body language. Watching [Nuggets center] Nikola Jokic play 65 minutes while lumbering up and down the floor. Seeing Enes Kanter [the Blazers center who is playing in spite of a shoulder separation] wincing in pain, hobbling around the court. The look on [Blazers guard Damian] Lillard’s face when he almost hit another game-winner right in front of us. It was crazy! It was a blast! Honored to be next to the great Doris Burke for it all!

Me after calling a 4 overtime game… pic.twitter.com/Wphz4O9aze

What’s the most important thing to remember when calling a game like this?
Document the game. Keep reminding the fan of what’s at stake, where we are in the series, and the fact they have to do this again in 48 hours for Game 4. Also, keeping your energy at a level that matches the excitement of the game and the experience for the fan. And, it’s such a big help to the announcers when you have a great group in the truck. Ken Wolfe [producer] and Mike Schwab (director) did a phenomenal job of steering the ship and being in sync with what Doris and I were seeing and saying.

Immediately after Game 3, Burke provides reaction on the Midnight SportsCenter with SVP in the video below. 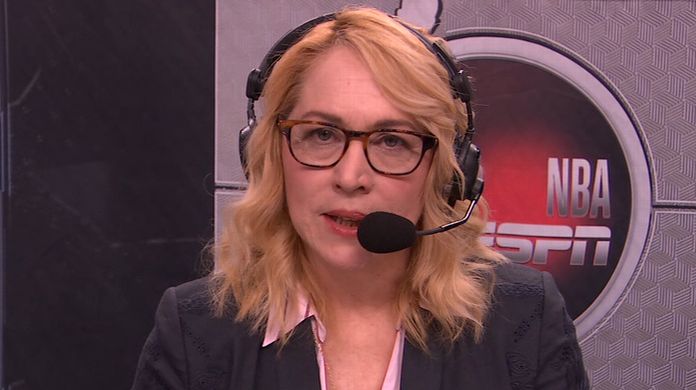