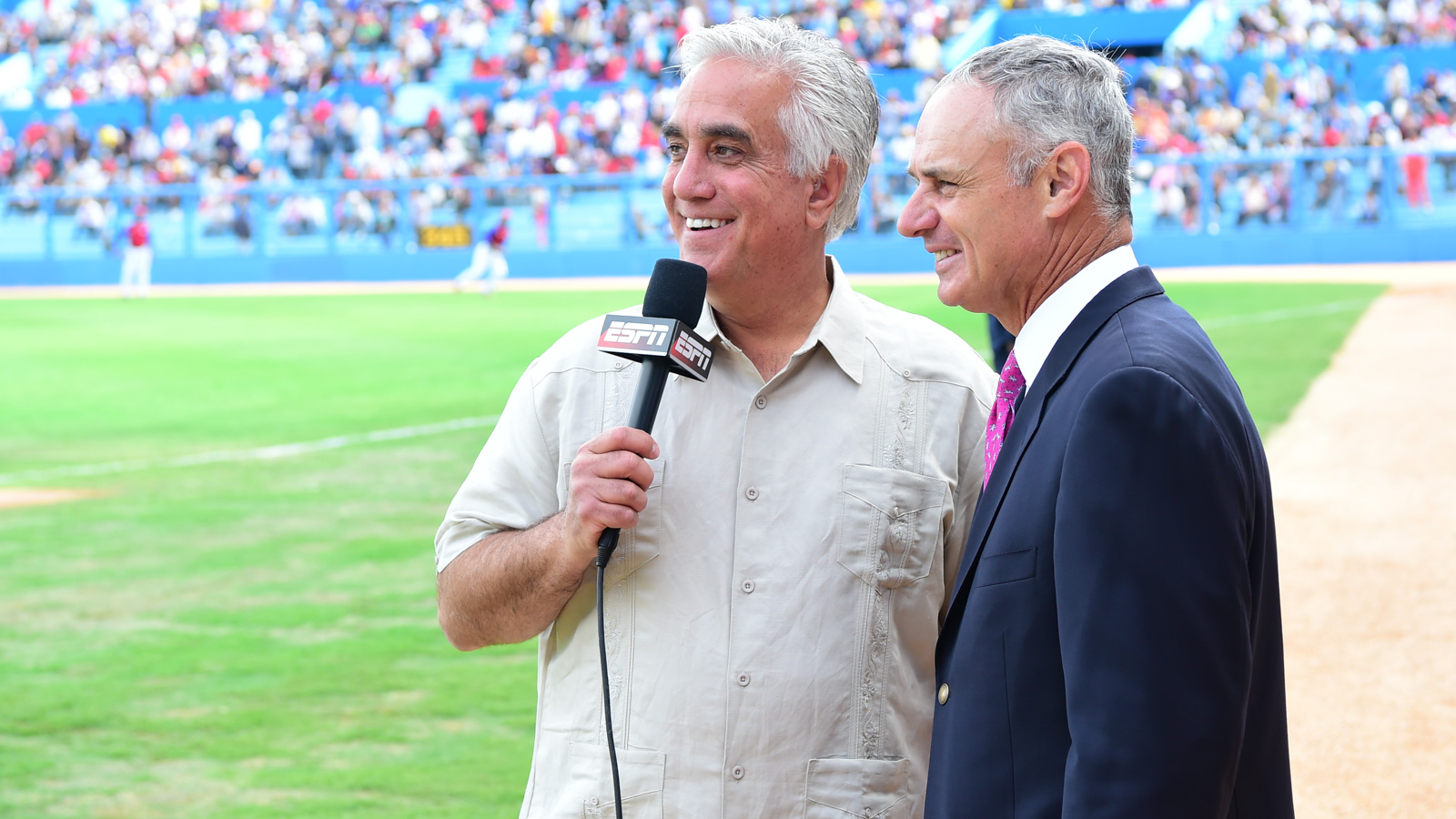 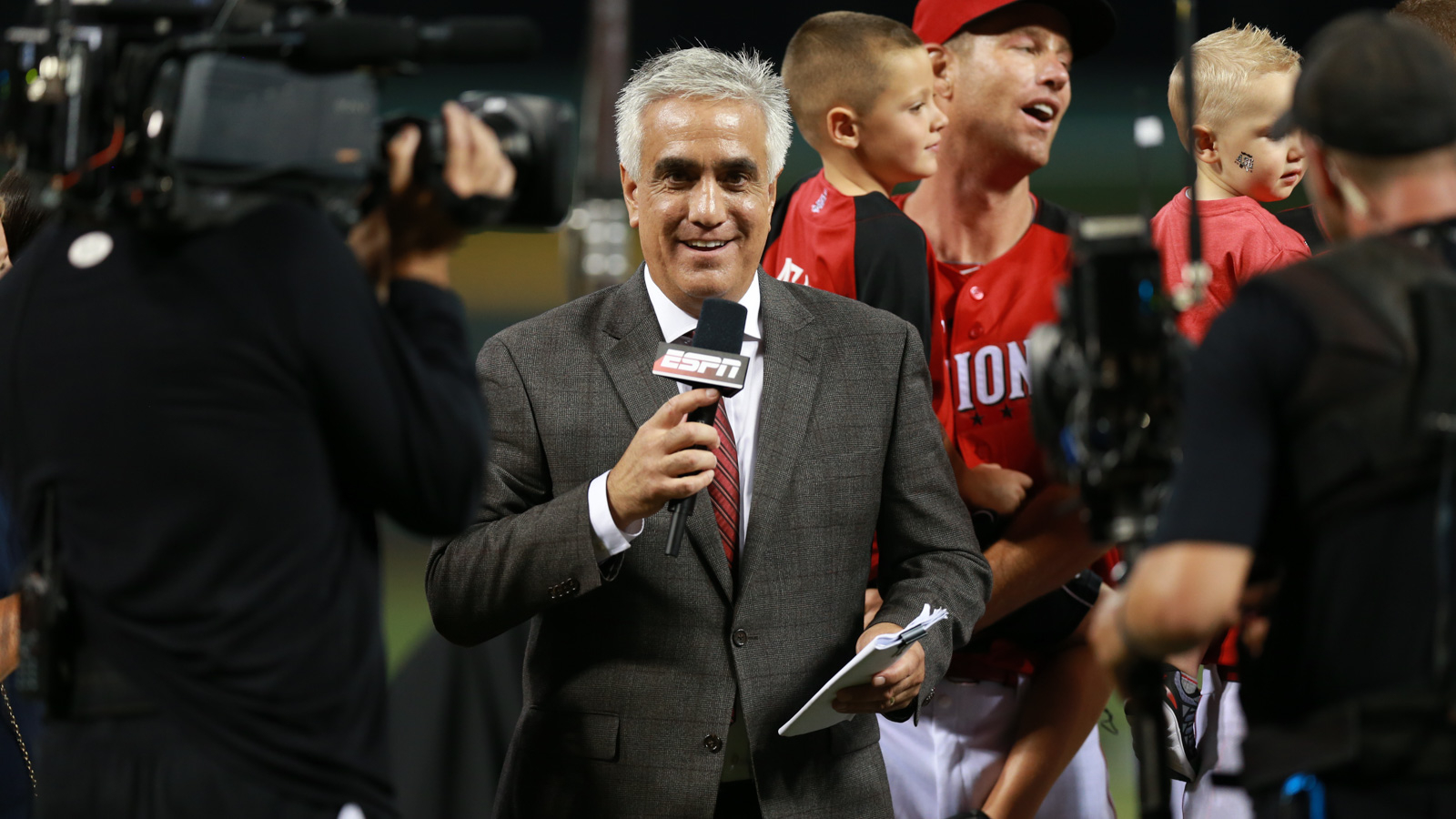 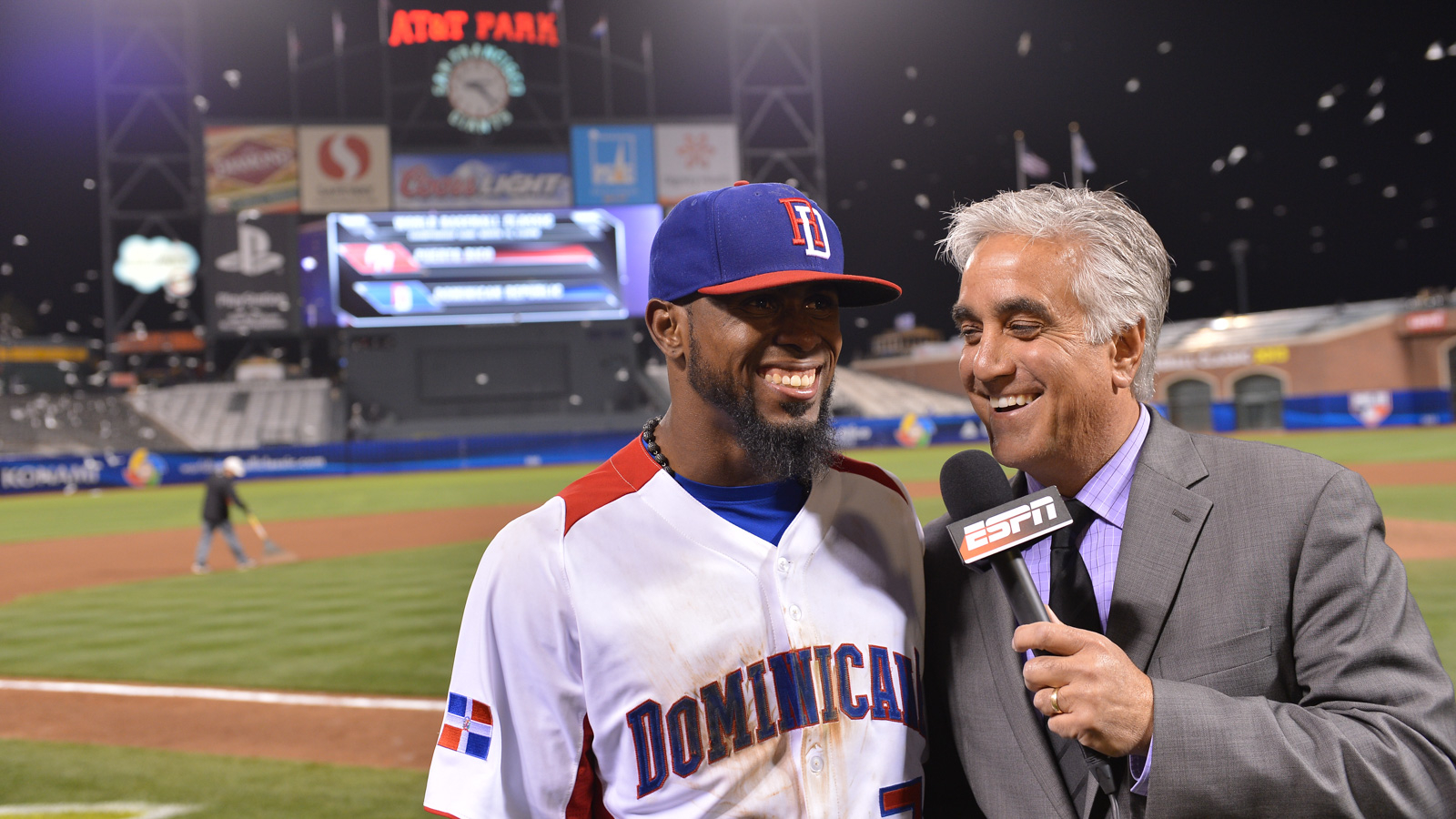 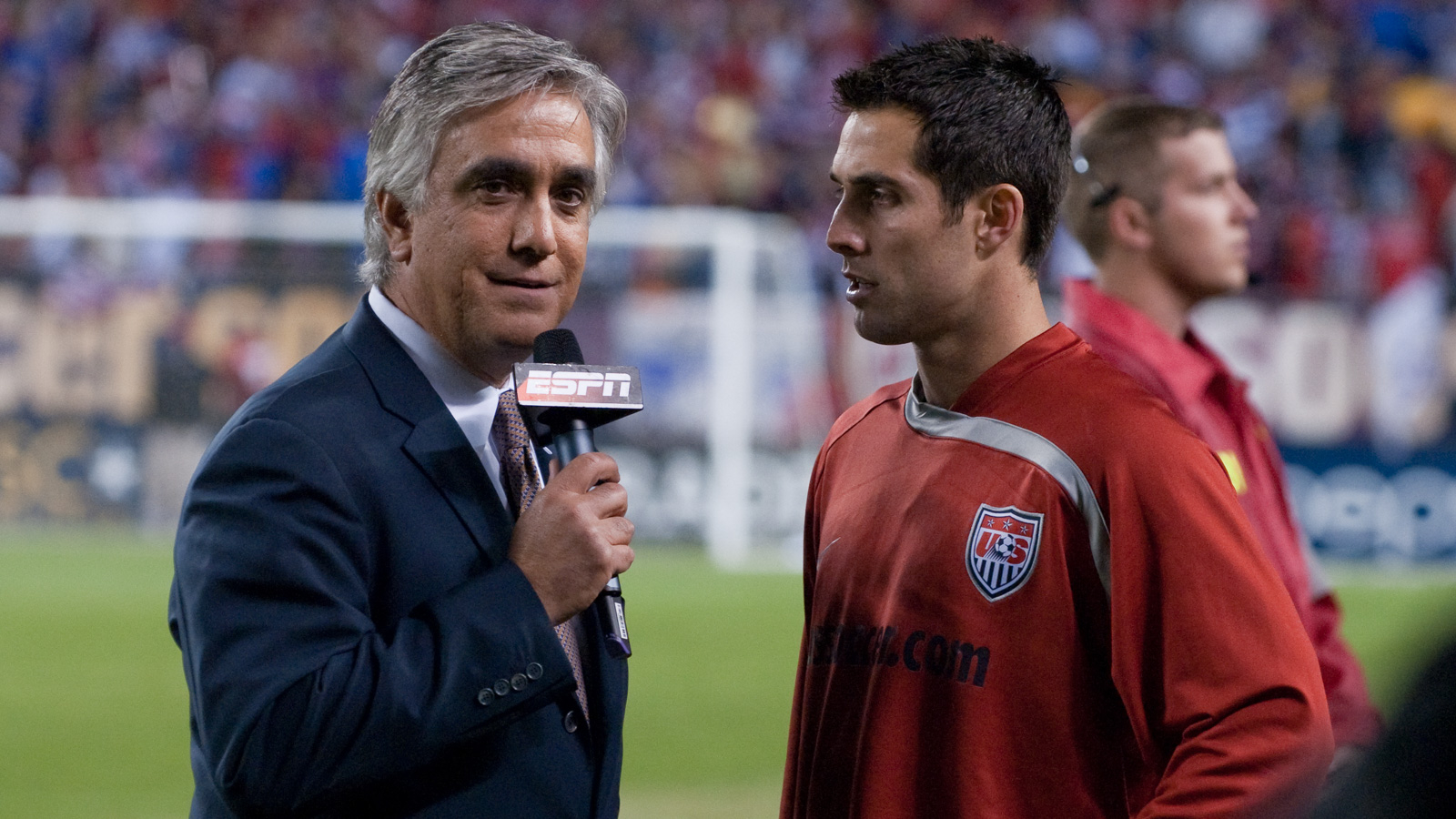 In 2009 in Chicago, Gomez interviews Carlos Bocanegra during USMNT vs. Honduras (ESPN Images)

“Pedro was far more than a media personality. He was a Dad, loving husband, loyal friend, coach and mentor,” the Gomez family said in a statement. “He was our everything and his kids’ biggest believer. He died unexpectedly at home this afternoon.”

“We are shocked and saddened to learn that our friend and colleague Pedro Gomez has passed away,” said Chairman, ESPN and Sports Content James Pitaro. “Pedro was an elite journalist at the highest level and his professional accomplishments are universally recognized. More importantly, Pedro was a kind, dear friend to us all. Our hearts are with Pedro’s family and all who love him at this extraordinarily difficult time.”

Pedro came to ESPN from the Arizona Republic where he had served as a sports columnist and national baseball writer since 1997.

He was deeply connected throughout Major League baseball having served as the Oakland Athletics beat writer for the Sacramento Bee from 1995-97 and at the San Jose Mercury News from 1990-1994. In between covering the A’s, Gomez served as a national baseball writer for the Miami Herald from 1994-95. Prior to that, he wrote for the San Diego Union, and the Miami News from 1988-90 and 1985-88, respectively.

Gomez once said his favorite event he covered for ESPN was Game 6 of the 2003 National League Championship Series.

Gomez remembered: “After Steve Bartman’s attempt to catch the foul ball over Cubs left fielder Moises Alou, producer Jim Witalka and I were whisked from behind the Cubs dugout, where we were getting ready to do on-field interviews with the NL Champs for the first time since 1908, to the virtually the same spot behind the Marlins dugout, where we saw Josh Beckett racing back and forth from the clubhouse to the dugout while chugging beers and saying, ‘Rally Beers, Pedro.’ It was a memorable night at Chicago’s venerable Wrigley Field.”

More than an elite journalist, Pedro Gomez was a good and decent man, so proud of his family, and his heritage. His loss is a hammer blow to all who knew this life force. Send one up tonight for his family and friends.

Incredibly sad news. Loved his job, loved life. Always had a smile on his face. Deepest condolences to his family. https://t.co/Ty8kWmBCnR

A husband, father, friend and respected colleague. So, so sad. Pedro was able to laugh at himself and make others laugh. A story teller whose friendship was a gift. A great teammate. Thoughts to his wife and children. Just awful news. https://t.co/hUSHKjzmDN

My gosh. Pedro was a wonderful man who always had a smile and a thoughtful word for another human. https://t.co/75HSIaV2T9

He was the absolute best of us. This is so crushing. Anyone who knew Pedro loved him. https://t.co/CZURZq6PPo

Pedro was so, so proud of Rio. We were talking about him Friday. How hard Rio worked and how good he’d gotten and how nasty his changeup had gotten. Pedro loved all his kids so much. He was just the best. https://t.co/F4KCSzFNIJ

This @pedrogomezESPN visit with SVP is a lasting window into his talent as a journalist and character as a man. https://t.co/gfa4Cwd5ih

Our hearts go out to the Gomez family, including Pedro Gomez’s son, Rio, a pitcher in our minor league system. ❤️ https://t.co/BPqmJb4oB6

I am so tired of losing so many good people. Just seeing the news about Pedro Gomez’s passing. Stunned. Pedro was the first @SportsCenter bureau reporter to reach out to me when I joined that team. Was a huge help when I started covering baseball, too. He was the best of us all.

From dinners shared to stories swapped, kindness and goodness personified Pedro Gomez. We loved asking him about Rio because he always beamed with pride when talking about his son. Hermano.

Pedro Gomez was the very best of us.

Life is more goddamn fragile than we ever truly realize. Pedro Gomez grew up in the same Miami neighborhood where I was born, Westchester (“Wechetter,” as we used to say). He was a Cuban-American who spoke Spanish as a first-language, became a prolific columnist …

Heartbroken to hear this devastating news. Pedro was a wonderful person. He grew up in Miami and went to The U. I always loved talking baseball and our Hurricanes with him.

My thoughts & prayer are with his family and friends. He will be deeply missed. RIP. https://t.co/bBXMB1Nalz

We are shocked and saddened by the passing of national baseball reporter Pedro Gomez. He was 58. pic.twitter.com/FVlcocprIh

In Pedro Gomez, we lost a bridge-builder. The best of coming together and bringing people to one understanding with energy, perseverance, and humanity. He treated breaking news like it was a birthday present to hand to us at our surprise party. Heartbreaking. @espn #MLB

A tribute on @SportsCenter to our friend Pedro Gomez who we lost too soon yesterday. He was 58. Pedro left an indelible mark on so many people. #RIPPedro pic.twitter.com/kKYBxXClj2

A story about Pedro Gomez: During the time he covered the Barry Bonds’ home-run chase, which only felt like forever, Pedro became a hero in my house. Our four sons were roughly between 10 and 16, and they loved the Giants in general and Bonds in particular.

1) For the 2nd time in three weeks, I'm breaking Twitter hiatus to tell a story of a great person we've lost. ESPN's Pedro Gomez: Sept. 18, 1993, I covered high schools for the Oakland Tribune, but the paper gave @JHickey3 a few days off, and sent 24-yo me to cover A's-CHW.

I am trying very hard to remember @PedroGomezESPN the wonderful way he was, instead of the horrible black hole left by his death. It's hard. We already miss him so much. pic.twitter.com/cGXdSk4jrz