First names are all you need in Philadelphia when you mention Randall, Donovan, Michael, or Jalen. Or, as ESPN’s NFL and college football analyst Robert Griffin III explains regarding his recent roundtable with Eagles quarterbacking greats:

“Donovan McNabb, the greatest quarterback in Eagles history; Michael Vick, one of the most dynamic quarterbacks in the history of the NFL; and [current Eagles quarterback] Jalen Hurts, with what he has been able to do in his career thus far, especially this year with his growth as a passer and as a leader?” said Griffin III. “I just thought it was an impactful conversation that was going to be had, and I wanted to be a part of that as a moderator.”

The result of this conversation (see sidebar) about what it means to be a Black quarterback in Philadelphia and the evolution of NFL signal-calling will air on ESPN’s Monday Night Countdown (6 p.m. ET) before the Washington Commanders visit Hurts’ undefeated Eagles for a Monday Night Football (8:15) showdown.

Another Eagles quarterbacking icon recognized on a first-name basis, Randall Cunningham, was not available for Griffin’s interview. But the group discussed Cunningham’s importance to the Eagles’ quarterbacking legacy at length. 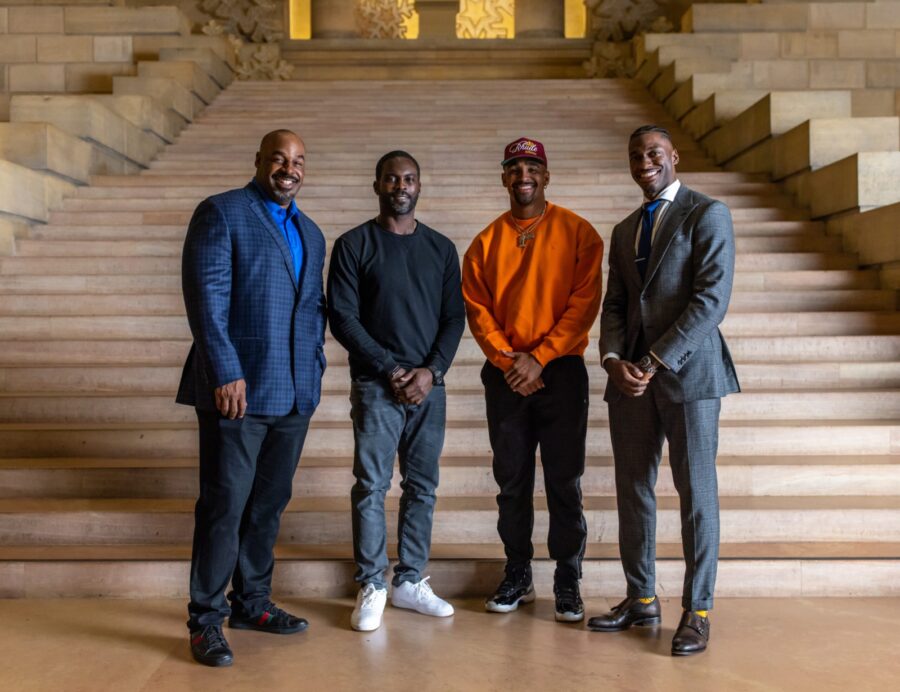 The idea for the gathering of Philadelphia play-calling royalty was first brought to the ESPN Features Unit by Production Assistant – and Philly native – Brooklyn Vaughan. Griffin III has often credited Cunningham, McNabb, and Vick for opening doors for him as a Black quarterback in the NFL, making him the perfect fit to facilitate the conversation.

“I grew up watching Donovan McNabb and Michael Vick, so I know the impact both guys have had on the city, the organization, and the fan base,” said Vaughan. “I kept thinking, ‘How cool would it be if all these guys – including Jalen Hurts – could sit down and talk football and their time in Philly.”

Despite their success as individuals in the city of brotherly love, McNabb, Vick, and Hurts had never met in-person. Tonight’s edition of MNF between Eagles and Commanders – Griffin started his NFL career with the Washington franchise – provided the perfect setting for the execution of the meeting.

But where to film the quarterbacks’ forum?

“We are always at a stadium, a team facility, or a player’s house,” said Producer Tory Zawacki Roy. “We wanted to fully grasp Philadelphia as much as possible. I wanted viewers to feel a close connection to the city.”

“The Philadelphia Museum of Art [known for its staircase immortalized in the film Rocky] is easily the most iconic venue in the city,” said Vaughan, who credited production coordinators Audrah Cates and Jamila Baker for handling the shoot’s challenging logistics. “The themes from the Rocky movie are perseverance and grit – traits that these quarterbacks embody.”

“These men have such a great resemblance to the Rocky character,” said Griffin III. “They have all overcome challenges, being doubted and being counted out.”

Griffin On His ‘Countdown’ Conversation: ‘. . .This Is Really About The Evolution Of The Quarterback’

On Nov. 8, McNabb and Vick traveled to Philadelphia to meet Hurts and Griffin III, where the conversation was lively and peppered with thoughts on Cunningham, fellow Eagle quarterback Rodney Peete and an honest assessment of the issues of Philadelphia, football, and race.

“A lot of people are going to look at this conversation and talk about it in the lens of the Black quarterback,” said Griffin III. “But, this is really about the evolution of the quarterback.

“Randall Cunningham was an outlier. Michael Vick was an outlier. Donovan McNabb was an outlier,” he said. “People said they couldn’t do it because they weren’t 6-foot, 5-inch, 240 pounds, and a pocket-passer. But now, when you look at Jalen Hurts, he is no longer the outlier – he is the prototype.”

Tonight, with the Eagles’ undefeated season once again on the line, Hurts can take another step towards being immortalized and, maybe – just like Rocky – earn a statue in one of the city’s most iconic landmarks.

The conversation will air tonight on Monday Night Countdown at 6pm ET on ESPN.