Former LSU basketball star Rudy Macklin reflects on the controversy his comments stirred in “No Kin To Me.” 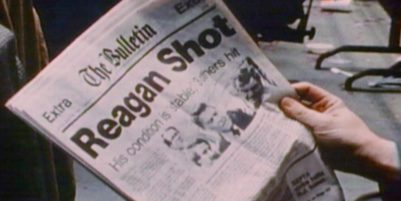 The front page of The Philadelphia Evening Bulletin relayed the morning’s tragic news.

In searching for the footage to frame his ESPN Films documentary “No Kin To Me,” director Marc Kinderman knew he would need two rich resources: ESPN’s video archives and Outside the Lines anchor and ESPN stalwart Bob Ley’s perspective.

The newest 30 for 30 Short, which debuted online Tuesday and will be featured during Friday’s 6 p.m. ET SportsCenter, tells the story of the controversy surrounding LSU basketball star Rudy Macklin during the 1981 Final Four in Philadelphia. On the morning of March 30, John Hinckley Jr. attempted to assassinate President Ronald Reagan in Washington. Less than three hours later, Macklin played in the third-place NCAA tournament game airing on ESPN between LSU and Virginia. The Cavaliers beat Macklin’s Tigers.

Afterward, a reporter asked Macklin whether the news of the assassination attempt might have affected his team’s performance. Macklin’s response – “He’s no kin to me” – ignited a controversy and backlash that resulted in threatening letters and phone calls to the Tigers star. In the 30 for 30 Short, Kinderman – who worked in ESPN studio production and on the SportsCentury project from 1993 until 2000 – revisits the era with the help of ESPN’s archives. His familiarity with ESPN’s video collection and Ley’s insights – the ESPN veteran drove the network’s 1981 Final Four coverage – were as crucial as having Macklin’s present-day perspective, Kinderman tells Front Row.

How important was ESPN as a resource for this film?
I didn’t expect to find [1981 game film] anywhere else because it aired on ESPN. They had the 1980 third-place game and the 1981 third-place game. No one knew quite where it was in the library. I had a little bit of library experience and made some suggestions. . . We were able to find it. The other resources – finding pregame sound and postgame sound, the Bob Ley reports – were invaluable to this. The Final Four special they did the day before – there’s some great sound from a roundtable where Dave Anderson, The New York Times writer, and Bob Ley have a nice back-and-forth in the piece.

The most important thing to the piece is the sound that Bob Ley got in the arena that afternoon while they’re waiting to see if the third-place game is even going to be played. . . There are shots of people reading the afternoon papers – there were afternoon papers back then – that had the shooting in their first editions.

How important is Bob Ley to this film?
He might even be second to Rudy Macklin in the film in terms of air time. He tells the story about what’s going on. He’s crucial. I’m glad he’s still here.

What do you want viewers to take away from this film?
I want them to think about what Rudy went through. What Rudy meant to say and what he said were two different things. Beyond that, this was a guy who had an awful weekend on the basketball court. He got badgered into saying something that he regretted. The fact is, it left a mark on him that even carries until today.

If the trailer below does not play on your device, click here.