That’s a lot of games in a short period of time. And for ESPN senior coordinating producer Matt Sandulli, one annual challenge is to keep the production crisp and the content fresh.

“Crisp” and “fresh” are two adjectives that describe ESPN’s new production and promotional spot – a lively collaboration with the talented students and faculty at the Duke Ellington School of the Arts.

It was a great opportunity to showcase the unbelievable talent that is cultivated at this very special school in Washington, D.C.
– Matt Sandulli, ESPN senior coordinating producer, on working with the Duke Ellington School students

How did this idea to collaborate with Duke Ellington school of performing arts come together?
Our music department has a relationship with the school and we had been talking about collaborating since last year. We have been using the song “Summer Forever” in our Little League World Series coverage since 2012. We decided this year we wanted a new version of the song recorded and felt the vibe of the school kids was a great fit. After talking with the school, we decided to film the recording of the song and use it for promotional purposes.

What was the vision for this project, who was involved and what was the goal of the video?
We contacted the school with the help of our ESPN Music department and pitched the idea. They were interested and it came together quickly because the kids were about to be out for summer break. It was a great opportunity to showcase the unbelievable talent that is cultivated at this very special school in Washington, D.C.

In what ways will it be used in our Little League coverage?
You’ll hear the new recording of the song throughout our coverage. The video portion has been used for teases and promotional purposes at the regional level and we will use it as a promotional tool in Williamsport. 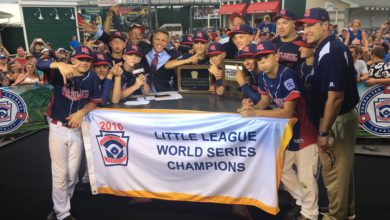