During his 25 years as a SportsCenter anchor, Steve Levy has appeared in 46 of the iconic “This is SportsCenter” ads. From his first appearance in February 1995 with Olympic gymnast Mary Lou Retton, to his most recent spot last year with NBA star Draymond Green, Levy has been in “TISC” spots with athletes and celebrities from across the sports spectrum.

SPY (2011): “The one with [Washington Capitals star] Alex Ovechkin stood the test of time with the Caps winning the Cup this year. I was told it was the most expensive “This is SportsCenter” promo ever made because of the equipment necessary to lift him thru the ceiling. There was a stunt double in place for Ovi but like every great action-hero actor, he does his own stunts.”

END ZONE OPTIONS (2006): “With [former NFL star] Chad Johnson before he became ‘Ocho Cinco.’ First of all, it starred [the late SportsCenter anchor] Stuart Scott, which makes it automatically among my favorites. But I had to get up on a conference room table and make like ‘sizzling bacon.’ It’s the “This is SportsCenter” promo I’m most asked about.”

HORIZONTAL STRIPES (2013): “With [SportsCenter anchor] Scott Van Pelt and [New York Yankees star] CC Sabathia. I ruined about 20 consecutive takes all by myself. I couldn’t stop laughing every time Van Pelt walked in the room. ‘Vertical stripes are slimming’ was the line by CC. He also said the Yankees should wear them on the road (they only wear pinstripes at home) and that line never made the final cut.” 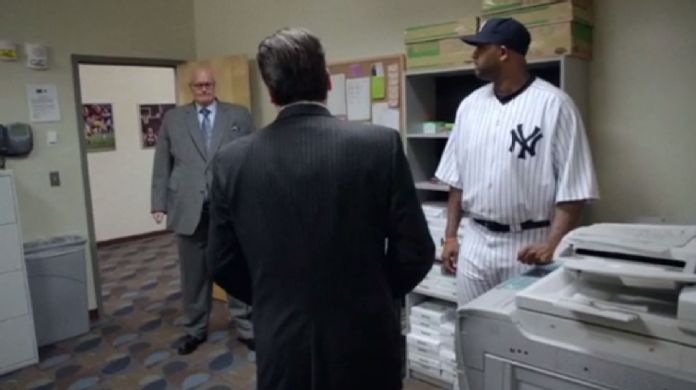 Since 1995, “This is SportsCenter” has given fans and viewers an inside peek at the Bristol campus with a humorous spin on day-to-day life at ESPN. The network has produced more than 400 advertising spots as part of this signature franchise.