Snow in Los Angeles? Cheese curds and chili by the pool in December?

“We wanted to highlight the juxtaposition of the two cities, Los Angeles and Green Bay, especially in the month of December,” said Sammy Silver, Director, ESPN CCU. “The Winter Tundra and La La Land – the land of sunshine.

“This time of year, a Green Bay Packers fan living in Los Angeles is likely dreaming of watching a Packers game with cheese curds, friends, family, and of course, snow,” said Silver. “All while lounging in their pool in the Southern California sunshine.”

That Packers fan would end up being former “The Office” star Baumgartner, whose portrayal of the embattled Malone was a hallmark of the classic sitcom. His friendship with Aaron Rodgers also helped score a cameo appearance from the Packers quarterback.

“We honestly couldn’t think of anyone more perfect than Brian to bring this piece to life,” said Amanda Paschal, Managing Producer, ESPN CCU. “He is a huge Packers fan who lives in Southern California and understands the juxtaposition of both cities.”

Now that the CCU had their Packers fan and a picturesque Los Angeles home equipped with a pool, palm trees, and all the bells and whistles, they needed the second piece of the puzzle.

The CCU team enlisted the help of Joanne Strange, Music Operations Supervisor, to help pick the perfect anthem for the piece. Strange suggested “Nothin’ But a Good Time'” – a signature song for Michaels.

His rock star party persona (his upcoming tour is even called “Parti Gras”) would provide the perfect juxtaposition to Baumgartner’s character.

The result was a two-minute open showing Baumgartner enjoying the luxuries of Los Angeles life before Michaels arrives – with Rams and Packers fans in tow – to throw a party in the basement – filled with Baumgartner’s famous chili, cheese curds, and even some snow.

“I had an absolute blast working with the ESPN crew and Bret Michaels to help celebrate Monday Night Football,” said Baumgartner.

“In my house – Monday nights during football season are always a party – and I’m so excited for the Packers to be playing this Monday night!”

Added Michaels: “This was a party from the word ‘go.’ I had my family there, friends there, Packers fans, Rams fans – and we just threw a party.”

“He gives us room to be free,” said Silver. “He knows we have some creative tricks up our sleeve, and he trusts us to make something unique.”

Adds Silver, “all we really need in life is rock n’ roll, laughter, kindness, and some Monday Night Football madness.” 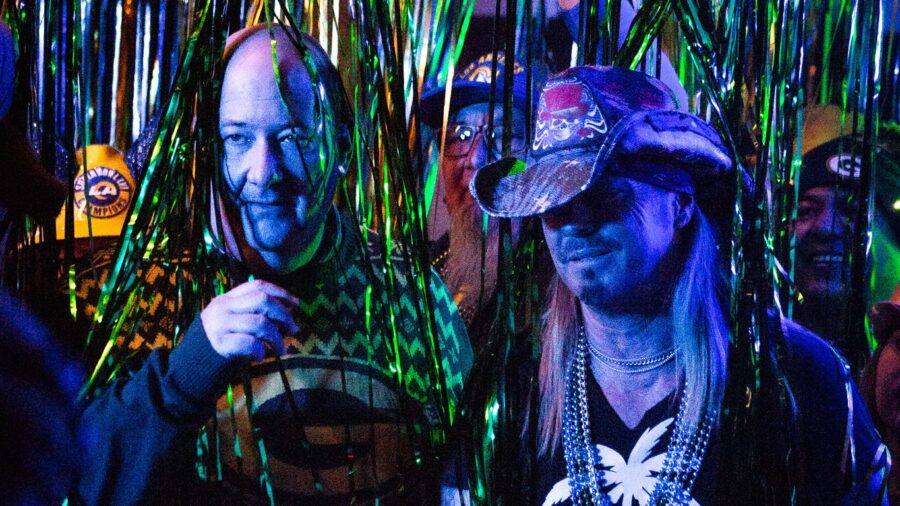 In the MNF open, Baumgartner (R) has words for the Rams mascot Rampage. (Erin Reid/ESPN) Michaels brings the party to the shoot. (Erin Reid/ESPN) We honestly couldn’t think of anyone more perfect than Brian to bring this piece to life,” said Amanda Paschal, ESPN CCU. (Erin Reid/ESPN)
BEHIND THE SCENES OF THE SHOOT WITH ESPN'S CREATIVE CONTENT UNIT

What was it like shooting this MNF Open in Encino, Calif., last week? Check out the behind-the-scenes video above, reflecting the work of the team featured below.